Another frustrating month, especially in FX where I insisted on selling lows and buying highs again, but things seem to be picking up into September.

People are getting used to the the idea that the eurozone isn't going to collapse (yet), but EURCHF is still at historically expensive levels. As CHF will lose more of its safe haven premium it makes it an attractive short against GBP. Obviously there's no net negative carry to speak of, and the chart looks good, as we're breaking out of a 3 or 4 year downtrend. The 1.40 level is good support provided eurozone breakup is off the table : 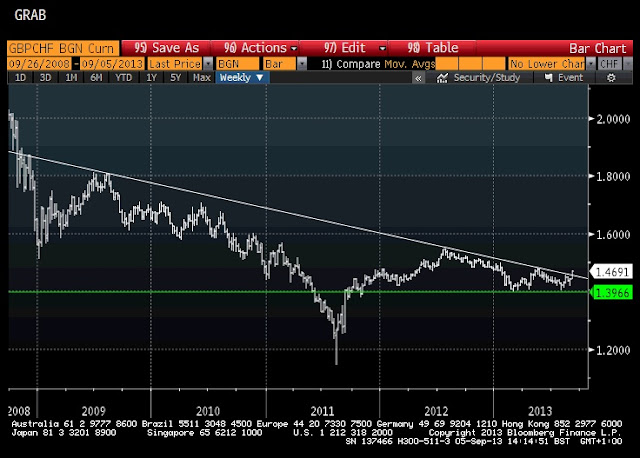 It's really a doubly leveraged trade on eurozone recovery, as this is also one of the main reasons for the weakness of the UK economy since 2009. I prefer buying GBP to selling short sterling or gilts as the positioning seems cleaner and I don't want to incur the negative carry in the yield curve.


2. Resumption of the Abenomics trade

Japan still has some of the cheapest equities in the world, especially the megabanks. With very little fuss they offloaded a huge proportion of their JGBs on to the BoJ last quarter (almost half of them in the case of Sumitomo), and they're still on very cheap price/book ratios (0.75 for MUFG) and low p/es around 8-10. Just cheap then. Kuroda's commitment to further easing if the consumption tax slows the economy is important in underwriting the recovery, and USDJPY should be forced higher by rising US yields.

The RBA may be taking a pause or done altogether, but either way the bill curve looks too steep. It's pricing 58bp between Z3 and Z4, and with all the PMIs in recession, retail sales growth stuck at zero and unemployment rising towards its 2009 peak that looks plain wrong. There are plenty of secondary reasons (mining capex cliff kicking in next year, some degree of fiscal restraint from the new govt and poor business confidence, eg the NAB survey). Further cuts next year aren't out of the question, but even without that this is my favourite slowdown trade. It's fighting the US rates headwind, but that's the reason for doing Z3/Z4 flatteners rather than just buying 3yr futures outright. It rolls down from 58bp in Dec to 31bp in Sep.

Last but not least, a Sept taper looks unavoidable now. The interesting question is, what next ? They've stuck so far to Bernanke's timetable (start tapering in Sept, finish by mid-2014), but the domestic data is turning out better than they expected, and the global data is far better. If anything that should bring the mid-2014 end date closer (and please don't suggest that Summers will stick to the schedule because he inherited it).*IF* they start with $10b in Sept, and pause in Oct to see the effects, then they have $75b to remove in at most 5 meetings. Alternatively they could start with $15b or $20b in Sept, or taper again in Oct. Any way you look at it, it's a more aggressive schedule than most people have been discussing, so it seems to me that when the market starts thinking about this on Sept 19th we'll have to sell off some more. Favourite trades here are short EDZ7 (still), covered puts in TYZ3 and FV/WN flatteners, ie 5/30s. And short some gold, just because it's had such a ridiculous squeeze.