Fed to market : If you think we screwed up last time, just watch this...

It's interesting to compare the situation now with 2003/2004. If the drop in unemployment persists as it has for the last 3 years, we'll reach 6.3%, the level of peak unemployment in the dot com recession, around the end of next year : 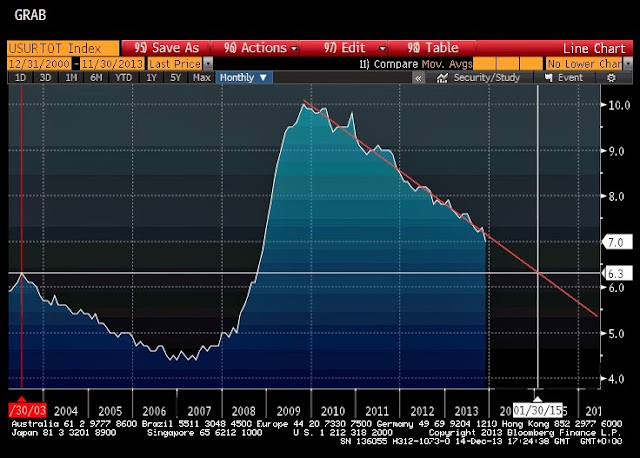 How should eurodollars be priced if the Fed subsequently reacts exactly as it did last time ? Well, they made their final cut to 1% in Jun03 as unemployment peaked, kept rates on hold for a year and then hiked in a straight line by 425bps over the following 2 years. Like this : 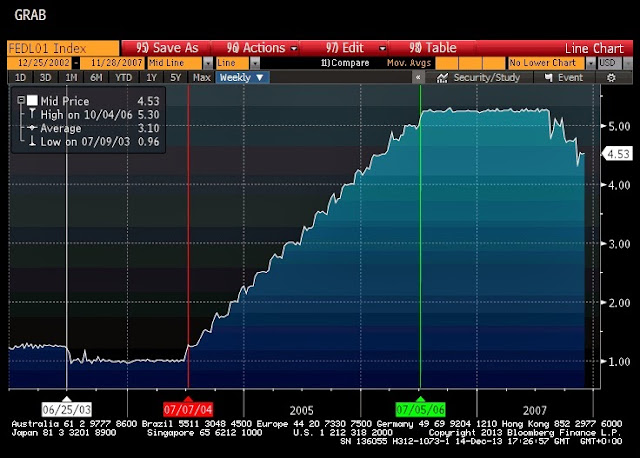 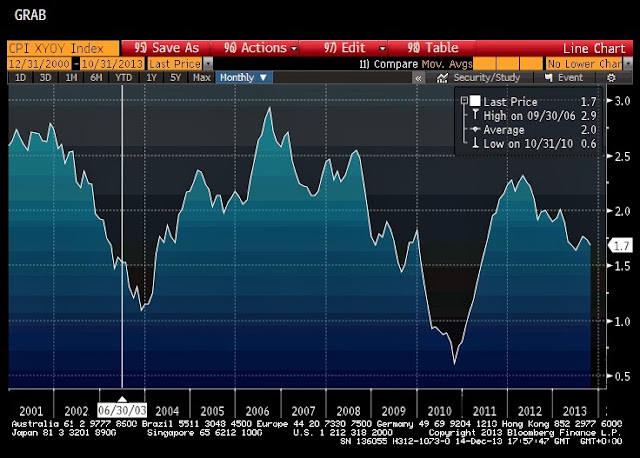 Inflation is actually higher today than in 2003, so real rates are even easier than nominal rates. In fact current 10yr break-evens are almost identical now to their levels in 2003 as well.

Obviously the Fed made a colossal mistake in 2003-2007. They kept rates too low for too long and inflated a monumental bubble which nearly destroyed everyone when it burst. So how can the current forward guidance, committing them to even lower real rates for even longer, be credible ? It all comes down to inflation I think. If the core cpi numbers turn as they did in late 2003, then the Fed will start hiking rates soon. Within a few weeks everyone will be dusting off charts like these and drawing the obvious conclusion that the steady-as-she-goes sequence of rate hikes from 2004-2006 is a better-than-best case scenario, and that to prevent the risk of bubbles they really ought to tighten even faster. Which all points to EDZ7 and its friends being 200bps or more lower than they are now. 95.20 on EDZ7 strikes me as a best-case scenario.

Personally I think there's a significant chance of this realisation dawning on the market in Q1, as we post stellar growth numbers and everyone races to upgrade their forecasts against the backdrop of tapering. Low delta puts on the golds are the obvious risk/return trade. Ideally equities will fail again here at 1810 on spx, giving a risk-off trade with a great risk/return to set against the rates trade. The combination could be the trade of the year if it lines up.

Email ThisBlogThis!Share to TwitterShare to FacebookShare to Pinterest
Labels: FOMC